FIRST SISTERS' SOCIAL : 1932
On the third night after the installation of Mai and declaration of     " Mai-ism " on 2 SEPTEMBER 1932 at Poona ( Pune ), which was finally done  after Mai had fulfilled several conditions that Maiji had dictatingly placed before Mai ( Mai-ism page 32 ) to get an assurance that Mai was most unflinchingly determined to have the installation and declaration, Maiji had wonderful dream. He saw that in a vast open lawn, innumerable sisters of different religions  and communities had gathered together to pray to God and to develop religious sisterly relations with one another. Maiji interpreted his dream to mean that Mai desired to convene a Sister's Social in strict purdah , so that Muslim ladies should have no objection, for the welfare of the world in general and that of attending sisters with their families and relatives in particular.
The first Sisters' Social was convened in Poona ( Pune ) under the president ship of Mrs. E.T.Choudhry of Bengal on Dusserah day of  9 October 1932 within a short period of five weeks from the date of installation. In spite of all ridicules, obstructions and oppositions , the function was gloriously successful.
Theosophists and Muslim sisters of the Aga Khan religion and Parsis of Poona Cantonment and Hindus of Poona City took up all responsibilities of  organisation.the meeting was unanimously believed to be a miraculous proof of Mai's intense approbation and greatest Grace to the holding of the Sisters' Social.To Maiji, it meant an additional proof for his conviction that he was spreading Mai-ism with the fullest patronisation and innermost prompting and working of God as Mother Mai. Maiji personally believes that Sisters' Social are being convened at Mai's Command and they are organised by Mai Herself through the human agencies,  prompted  and electrified by Mai Herself.
In the said Sisters' Social, a rich Parsi lady of 81 years attended the function, being actually carried by her grand daughters. these grand daughters declared in the meeting that their grand mother had to be brought there, as she had a dream to the purport that attendance in the Sisters' Social meeting was the highest expiation of all sins for anyone belonging to any religion. the attendance was a little more than three hundred sisters of different religions and communities.
~ SAINT SHRI MAI SWARUP  MAI MARKAND ( MAIJI ) / MOTHERS MESSAGE / UNIVERSAL RELIGION MAI-ISM 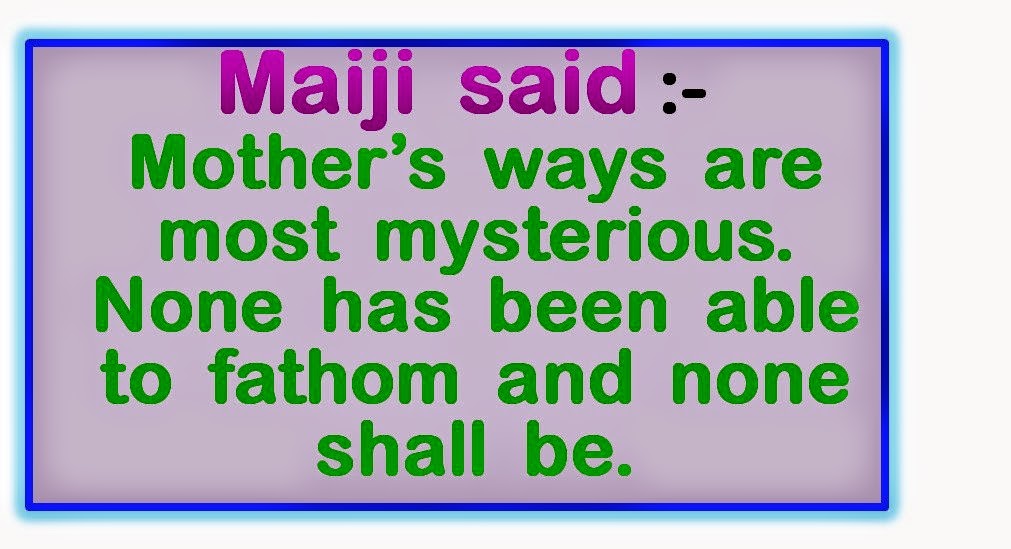 Some outstanding quotes in Prologue section of MA-ISM book: During the writing, as also during the printing stages, there has been all al... 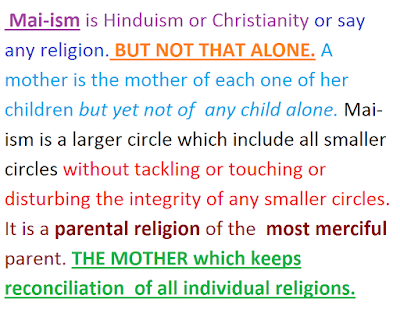