67. There are experiences of "messages" as well. Thus, Mother helped Her devotees in so many ways , dreams, visions, suggestions and messages, which one would very clearly hear to the preciseness  of being able to  jot down and by way of  a regular dictation as it were. We are referring here to the instances of  " Direct Personal Contacts " and not to so many altogether- unknown arrangements and disposals of matters that Mai is managing, behind the back of Her devotees, for their protection and smooth running, for their, Yoga and Kshema-attainment and retention. As a matter of fact, devotees gradually get trained  to believe they are under the constant care and supervision of their MAI and get more and more , at all hours grateful, for all the good that is conferred on them.  The devotee who attributes the miseries that he has to pass through in life to Mother, without the gratefulness, is no devotee at all.He is bargainer and a business trader and an exploiter of Mother's Grace , he is sucker , a leech.

68.There is an instance of a long message, stated to have been actually dictated by Mai, which is most encouraging and illuminating for devotees  trying hard to struggle with their unfavorable circumstances and repeated discomforts and inconveniences . The substance may be gathered from the following brief extract :

29 December 1949
" Beloved and Revered Mai Swarup Mai Markand,
" I beg to record the following. In fact, it is a copy of what I had, on the spot, recorded on Friday the 23rd ( December ) instant, at midnight hour. It is not mere "wishful thinking", not "imagination", not a hallucination, not a phantom. I was seeing with my own eyes, open and alert eyes, Mother Mai, seated on a chair, next to my table, calmly convincing me of the Reality and cool-mindedly and quietly giving a resume of what She wanted to convey..... "

* * NOTE :-[{ Although, the devotee means and rightly means, it was a Mother's message to him personally, the Founder sees a good deal of most valuable teaching which is universally applicable and useful to so many of a certain cast and group of mentalities and circumstances, and the Founder interprets "you" in the message to mean "all like you, including you", and not "you" alone... }]

The letter continues :
" .........What Mother said was this :-
" You are given all obstacles in smooth life, with a purpose. I have tried to bring you round, to suit my ways. You are often caught up in life's tangles and hence the progress I mean for you, becomes slow. But still, in spite of you, there has been and is, a gradual progress.Don't think I can't give you wealth, power and a brilliant career. I can do that very easily, but if you become any such one , entangled in those things, I cannot have you for my work. I want you for something, which is many times much more important."
" Do realise this from now onwards, at least. Don't worry about how life passes, and will pass fore you.It is not without purpose. I bring you in contact with " Sat Purushas "( Saintly Persons ), all with deep purposes, and to train you. Worldly life ( Samsara, Income, expenses, joys and sorrows, pleasures and pains, etc. ) will always be one of endless problems, and there is and will be no end to your prayers. Surly I wish you are not going to use me only for these  useless  problems-solving, and surely I am not going to rest with just helping you only your ever repeating worries and problems."
" What is the end of it all ?? What is the purpose of life ?? Just think deeply, most deeply, meditatively. Mai swarup was specially brought by me , to this house, not without deep object. His repeated enlightenment about Mai-ism and Mai for one and all, the whole humanity, is so crystal-clear, you have read and understood, and should be convincing. His present letter and elucidation of Sri Ramakrishna Paramahamsa is still more vivid. What more can I do for you ?? It is so simple and you people wander here and there and ask for this and that, and such petty and unreal and ephemeral things , and waste time and valuable opportunities lying before, and even sometimes forced by me on you,as  though,fulfilment of material wants has got any end, and will permanently solve all problems for all persons!!! Take things as they come, and do what you can. You should, as normal beings, be ever remembering that your best and worst efforts, are controlled and guided by Me, unseen by you, and unknown to you ".
" I have been training you, all along, against all odds, though the progress is slow, slow , but never-the-less steady and permanent. there is  a definite gradual improvement. You are meant for my purpose  and to fulfill My will. Have some sense of proportion, as to what is important and on what you should spend more thought and time, i.e. (a) looking after your material problems and getting yourself more and more entangled and (b) spiritual virtues of life and spreading to others all about ME ".
" You should not miss, atleast hereafter and you should not loose the valuable times ahead, and the rare opportunity of fully utilising Mai Swarup Mai Markand and of serving him and ME. Every day and every opportunity lost and missed, can never be had.It is loss to you and others and to ME. Don't worry about the rest. Leave things to ME and leave them to ME absolutely ".

Such was the clear and correct enlightenment, such as I never had in such a calm and endearing manner, all my life, from anyone and not even from Mother ( here the writer means, either the Mai Image he worships or more likely, the Founder). My mind and  brain was never so clear and calm. and was never convinced so fully, as I became and I was, on 23rd (December) night.From that time my outlook on life  and my problems has changed so vitally that I am now carefree and take things lightly, and know that my chief aim and purpose is to serve Mother, and that on the lines indicated by Mai Swarup Mai Markand and to be of service to him (Her through him), and to utilise him fully and not to miss any opportunity for such service.
This is to be so, in daily life, thought, word and deed. All good that Mother confers on me, is with a purpose , not for me to foolishly enamoured with and be lost in material glories  but to be all the more realising Mother's Great Glory, All for Her work and as per Her Will.
In fact, I had drafted a telegram; but I hesitated and I wanted to make sure that was really Mother. Of course I carry on, but the chief and  most important work is , service of Mother and Mai Swarup ( both the same as Mother Herself said). Mother will take my burdens on Herself, in some way or other. I need not bother, any longer. the text of the telegram, I drafted , is as under :-
EXPRESS

MAI SWARUP MAI MARKAND
Saraswati Road
Santa Cruz - Bombay
" Mother tonight grants me calm and correct enlightenment. re: Mai, Mai-ism, Mother purpose of life, training me against all odds  with slow and delayed progress for the purpose , as per Her Will. Mother says  I should not lose valuable time  and miss rare life opportunity of utilising Mai Swarup and of serving him and Her. Assures that rest be left to Her - ( Friday, 23-12-1949 , midnight hour). "
" I close. I pray I may be made a worthy servant and instrument of Mai and Mai Swarup. I pray my "Moha" " attachment for Sansar ", greed and lust for money, power, pleasure, etc. may not take the upper hand and hinder me and Her work".

Some outstanding quotes in Prologue section of MA-ISM book: During the writing, as also during the printing stages, there has been all alon... 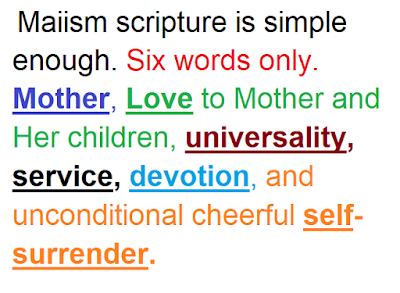